A Little about my history...​
Greeting Card Salesman
1971 ~My Mother was a smart woman and she got me going around the neighborhood with a punch game onetime for a big stuffed pink panther. I went to the Brackens' the Auckers' the Mac Leans' the Barkers' the Stotts' ...even Paul Prides house!

...next it was greeting cards at Christmas

...and that was when I started mowing lawns and even got a lawn about 7 miles away and rode my bike to the Dawson's. Where Mr Bernard Dawson used to say "you got enough gizmolene for the mower?"

...and his wife would make me fancy sandwiches for lunch. They were like Lovey and Thurston... and the pool they had me scraping never stood a chance of being repaired. Being a Grandfather away from my own, I understand so much more as I age and think back. Outside of mowing and weeds, the pool was just busy work. They were sweet.

...is it any wonder I became a meat man! I wouldn't trade my life for any I've seen or heard about! When I was a kid I would climb 100 feet up in those big maple trees and look out and think what will I be... "will i be happy? ...will I be rich? ...here's what she said to me: "Que Sera Sera whatever will be will be the futures not ours to see Que Sera sera."

Thanks Mom you started the whole ball rollin' I miss ya!

Masonry Contractor
This guy taught me how to be a lot of what I am today when it comes to logic and intimidation, building and common sense. Jim Smith taught me how to wire hot 110 and 220, ~ how to build a stone fireplace and chimney that will still be standing now today and when I am gone. Also a few good tricks to make sure you get paid) ...how to do carpentry, and flooring, and roofing, and plumbing. everything from the basement to the roof shingles. He treated me like a son and I did live with family of Seven kids. But that is how I come to be with them in the first place. His son Chuck befriended me in the eighth grade, ...and after? I never let anyone pick on me again! Chuck Smith and I have been brought back together after 35 years of being serparated and it has brought back so many memories we shared in some of the most character building times of my life.

But yeah I can basically build a house from the basement up, but I am not proficient enough to just jump in and start doing it again! ...at least not without a good helper! I heard Jim passed and it made me sad but James also taught me how to drink til 2:30AM ...and get up at 6 AM and go to work! He used to tell me: "If you want to hang with the Night owls, you got soar with the Eagles!" Funny how certain phrases stick with you... Thanks Jim I Love ya and will always remember you in a hero status!

Ship Chandler
That abiilty to get hammered and function clearly paid off here... This is the craziest of all stories I think... I had left Ohio because I had had to many tickets and could no longer drive there. well long story short, I was living at the Astro Village Hotel in a room next to Sugar Ray Leonard in 81 when he fought Hearns. I met a guy and his wife at the light on the feeder of South 610 loop, followed them home drank a lot of booze and he told me I was perfect for this job. Next day went to see Bob Kimbrough after 15 mins. I was hired. I put one of my motorcycles ( a red Yamaha 750 Special) in his Warehouse and he gave me an advance of 2000 cash a new Cutlas Supreme and a beeper! OMG I was the shizit when I went back to where the guys were. Jose will remember. I was on call 24 hrs a day and had a 100$ expense account daily to entertain the Captains and officers that could come off the ship. ask me and I'll tell you the exciting part! He got me out of a huge pickle and when I came back to Houston to go to work he had to fire me. 81 was frickin awesome though I did ok! Sorry Linda

Route Salesman
Bob Mederios! ...and his brother Danny two hard ass roofers gone into meat sales of the finer restaurants products to the upscale homes from Houston to Lafayette. Louisiana these guys taught me how to bargain and do it fast on the back of a truck and they had 9-10 repeats and regular routes. I loved it! I took over the Woodlands which back then was all brand new.I can't tell you all the stories that keep flying into my head as I do this profile this way. This is actually a good to to chronolog your life and each one of these is a chapter in itself...So anyway Bob kind of like Stallone in looks but he was reading Tom Hopkins and Napolean Hill and we would have these meetings everyday and i took notes and it locked in my head. Thanks Bob I can't wait to find out what you and your brother are doin. We busted some heads back then huh?
Meat Brokering and Managing my own Company
Teresa will remember this when I went all out and had a store on Smith Street in downtown Houston and my customers bought stock into my company then everything went to shizit and we left our truck with my dad and lost the Olds 88 and the big house out in Dairy Ashford. We moved to Buffalo and in to my in-laws house. Thank God I can sell!

Car Salesman
!988 Dan was born #3 Sold Acuras when they first came out had a brand new integra for a demo spun it out by the Ford plant. Michael Perry was my Manager and this is when we first came to Buffalo from Losing my Meat brokerage in Houston. 3 years later I came back and RJB Enterprises bought me a white 1987 Legend. Car Sales had always been good to me although I was never a superstar in Buffalo. That was the first year of the Acura and we were selling them at 2000 over sticker...supply and demand! Those were the days brand new cars all the time! And I got a great story about the Legend Coupe just remind me.

Cloth Piler!
Oh my God Buffalo New York and I hit a dry period and took a real job at this suit factory which was within biking range of where I lived now with the mother of my children 3 kids and a Schnauzer!
I rode my bike and during the first few days they moved me to this cool job where you fly alongside this long table and pile cloth to be cut on another table. This is when I formed "the Society for the Men who Bark" now Mark Caligeri (I can't wait to play remember when) and I and George all had our own special Bark. I of course like a Bull Mastiff Mark C was I think a bulldog and George was a chihuahua ! If you seen the Supervisor coming you were to Bark. He never knew hell of a nice Guy but he would smile cruise through and we would go back to whatever we were doin that we shouldn'ta been doing. Needless to say I started going back out selling meat with Dave Daluca and then the family begged me to go back into the meat business. Now if that ain't an education I don't know what is...

Company Representative
These were the only product Monty Hall ever endorsed and they would take up three hours of your afternoon by putting a good movie on  (  remember kids back then we didn't have it like we have it now ) and then every commercial was Monty showing how cool tilt windows were with double and triple pane glass. Chris Guercio was my running buddy and man did we do some crazy stuff. We would play video games until 3am talking about the people we had sold or lost that day and how to not make the same mistakes and learning more and more features and benefits of the Omni Window! The extruded polymer plastic wasn't the only thing factory baked!

Meat Broker
Yeah you guys...Dick Rush, Matt Klein, Danny Dacunto, Sammy. and Paul Tamburillo, dare I say Bruce Selig and Wayne Gretsky! I miss those days we did some crazy stuff. delivering the good stuff to people back then was so cool. I had customers that became like family. And the adventures of Dick Rush and Mark Neuhart will take up a whole chapter. Can't wait to get back in touch with some of you guys

Executive Courier
Now I'm gonna probably get in trouble for this with my Dad But I ran the dogshit out of a Dodge Caravan that I had bought from my Dad. BTW I do seriously miss my Suzuki Intruder Dad! I drove that Van from Dickinson to the Katy Freeway at 90 mph everyday and if you know me you know I'm not exaggerating. This kid was my dispatcher and I soon found out you gotta take care of this guy! So I would drive from Galveston to Tomball and out to Sugarland to Downtown Houston where I would have to park under the skyscraper or meet a guy on a bike and hand off to him. It was exciting and I would have to go up into offices on the 60th floor and meet people that were demi-gods in my eyes. But trust me don't get in that business unless. you are crazy...ask me about Katrina sometime that's a whole chapter in my Book!

Fabrication/ Machinists/Plant Manager
started out as a temp ended up hiring my son and Night Shift Supervisor of the whole plant. I was still a temp and was signing the other temps time-sheets and whether they could come back or not to the plant. But I was a little too arrogant at the time and had a CSS job I was certified for waiting and I gave Kevin the keys and walked away. I couldn't get a five dollar raise immediately only two and I was mostly pissed that they let my son go because of a jealous supervisor ,but it's and incredible story of rising through adversity. My son Nick Neuhart could probably tell the story better. He seen it through different eyes. But just so we are clear I wouldn't change a thing if I went back knowing I would be here today. I have people who love me an d depend on me and I am right with GOD.

Industrial  Millwright
I worked and learned on Turbines like the one in the Iosepa Desert at US Magnesium where I was part of building a power plant outside of Tooele Utah! Hey to my friends at the KIRK HOTEL you should be here! Refineries, and Chemical plants with TPI out of Houston. But that's not the kind of travel I want, and I am retired from my safety harness and OSHA standards. I wear flip flops now! LOL
A+ Certified Computer Repair Technician 2004
I can't keep up with all the networking but everything is board replacement now and all that digital microprocessor has taken board repair by the wayside. Now I promote and I perform! Hit me up!

Back to top
Thank you for contacting us! If needed, you will hear back within 48-72 hours. 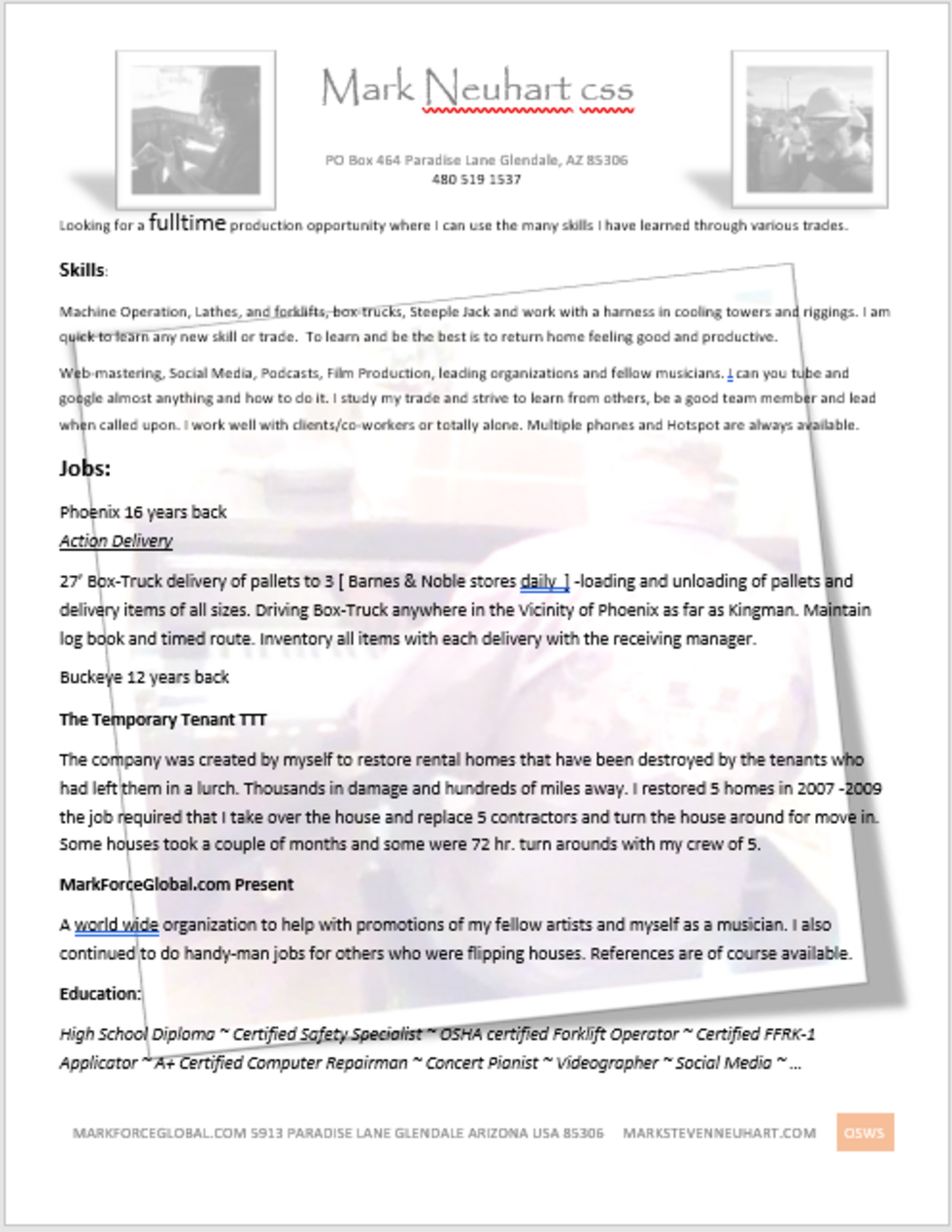